The History of AMWA

In the 1955, City of Athens officials knew another source of potable water was needed to keep up with the demand of a growing Athens.  At the time, Athens’ main sources of water were small groundwater wells in town (some are still in use today).

In June 1955, Wisenbaker, Fix and Associates, Consulting Engineers submitted a report to City leaders that a surface water supply would be needed.

The issue was how to finance such a large municipal project, as the City of Athens could not take on any additional debt or issue any additional bonds, at the time.

What if a separate organization could be created?  This organization would be able to issue bonds, acquire land, and construct facilities.  An organization solely focused on ensuring an abundant water supply for Athens for generations to come.

The first was asking the Texas Legislature to create the Athens Municipal Water Authority.  In 1957, Senate Bill 395 was drafted to not only create the Authority, as a Conservation and Reclamation district, but also set district boundaries, allow bonds to be issued, appointed the first Board of Directors, and shaped the first two decades of the Authority’s existence.

With no opposition, Senate Bill 395 was passed and approved by Texas lawmakers on May 2, 1957.

Arguably the most important vote was held on October 8, 1957.  The citizens of Athens would vote by a nearly two to one margin, to allow the Authority to issue $1.1 million dollars in bonds.  These bonds would fund the damming of Flat Creek to create the 1,500-surface acre reservoir, the water intake system, a two million gallon a day water treatment plant, and an 18” water line to connect to the City of Athens’ distribution lines.

After receiving the confidence of the people of Athens, the Athens Municipal Water Authority moved ahead with the project.

Construction on Lake Athens dam begun on September 25, 1961, with deliberate impoundment beginning on November 1, 1962.  Lake Athens was “officially” complete in May 1963.

A two million gallon a day water treatment plant, located at the corner of FM 2495 and FM 2892 was finished in 1964 and began sending treated water to Athens’s citizens.  The water treatment plant is still owned by the Athens Municipal Water Authority but is operated by the City of Athens utility department.

In the late 1990s the Board of Directors started planning for the future of Athens water supply.  Ultimately deciding that groundwater wells would bring Athens plenty of water supply and be a more drought resistant source of water than just Lake Athens.

In 2013, AMWA constructed a million gallon a day water well at the water treatment plant.

AMWA is currently expanding their water production capabilities once again, with the first phase of the Powder River Well Farm under way.

In future a”lure”ing posts, we will discuss the history of recreation on Lake Athens, details about the well farm, and more. 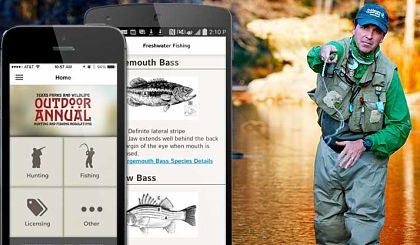 The Outdoor Annual has gone mobile! Afield or afloat, it's easy to access regulations on your iPhone, iPad or Android, even without internet service.

If you've ever visited with our staff regarding improvements to your lakefront property, more than likely you've heard us mention the 448'. What is it?

We've moved our offices and are now located at Lake Athens!